The performance of her life 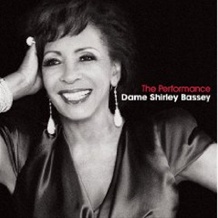 Last night Neil and Chris attended Dame Shirley Bassey's Electric Proms concert at the Roundhouse in London, highlights of which can be watched on BBC2 TV tonight at 10.40. The concert included "The performance of my life", written by Pet Shop Boys, which is included on her new album. In an interview published today she comments: "“I love all of the songs, but the Pet Shop Boys’ song The Performance Of My Life got right into my head, and made me sob and not many songs do that. Now I feel I don’t need to write a book. The record is my autobiography.” The Electric Proms concert can also be listened to via the BBC Radio 2 website. The album, "The Performance", produced by David Arnold, is released on November 9th, and also includes songs by Rufus Wainwright, Gary Barlow, The Manic Street Preachers and Richard Hawley.