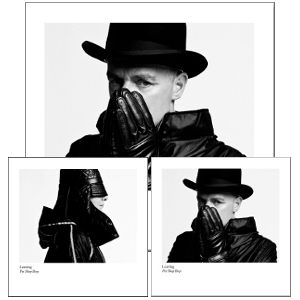 Pet Shop Boys' new single, "Leaving", will be released in the UK on October 15th and is now available for pre-order from this site in three different formats. CD1 includes "Leaving" plus two new songs, "Hell" and "In his imagination", and the 2003 demo of "Baby". CD2 has the "Lost her love" remix of "Leaving" by Dusty Kid, the "HappySad" remix by Andrew Dawson and the original 2010 demo of "Leaving" produced by Pet Shop Boys. The 12-inch vinyl has the "Lost her love" remix of "Leaving" by Dusty Kid and the "HappySad" and "HappyHour" remixes by Andrew Dawson. If you pre-order any format from this site before midnight on October 14th, 2012, you will be entered into a draw to win one of two "Leaving" 12-inch test pressings signed by Neil and Chris. Three digital formats will also be released on October 14th which include the tracks on CD1 and CD2 listed above as well as three brand new remixes of "Leaving" by Pet Shop Boys. Two of these are available now for pre-order on iTunes and Amazon. The third, "Leaving Again", will be made available soon.