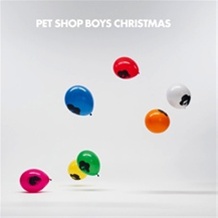 Pet Shop Boys will release a new EP, “Christmas”, on Parlophone Records on December 14th. The full track listing is: 1. It doesn’t often snow at Christmas (new version) 2. My girl 3. All over the world (new version) 4. Viva la vida/Domino dancing 5. My girl (our house mix) “All over the world” is a new version of the track from Pet Shop Boys’ latest album, “Yes”. Also included is a new version of “It doesn’t often snow at Christmas”, originally an exclusive Christmas single issued to members of the Pet Shop Boys fan club in 1997. Both new versions are produced by Marius de Vries and Pet Shop Boys, based on the original tracks, and have orchestral and choir arrangements by Matt Robertson and Marius de Vries. Pet Shop Boys’ arrangement of the Madness classic, “My Girl”, was originally performed with Suggs and Carl of Madness at “Can You Bear It?”, last year’s charity benefit for the family of Chris and Neil’s former assistant and close friend, Dainton Connell, who was tragically killed in a car accident. The EP also includes the medley of Coldplay’s “Viva la vida” and Pet Shop Boys' “Domino Dancing” which has been a highlight of the current PSB world tour. This studio version is produced by Stuart Price. The EP is being released on both CD and digital download.